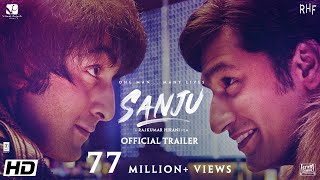 Sanju Trailer: Here's how Bollywood is applauding Ranbir Kapoor for his performance

There is no doubt in saying that Ranbir Kapoor's upcoming film ' Sanju' is one of the most awaited films of this year. Ever since the biopic was announced it has created a good amount of buzz among the audience. The teaser of the film has recently released and it left everyone impatient for the film. Now the makers have finally released the trailer of the film and we stunned with Ranbir Kapoor's portrayal of Sanjay Dutt in the biopic. The trailer is gripping and it gives an

Meghna Gulzar’s directorial ‘Raazi’ has been performing stupendously at the box office. The film which boasts of some stellar performances by actors Alia Bhatt and Vicky Kaushal collected Rs 4.42 crore on its third Sunday, taking its grand total to Rs 102.50 crore at the box-office. As per reports, ‘Raazi’ is the fifth Bollywood film of 2018 to enter the Rs 100 crore club after ‘Padmaavat’, ‘Sonu Ke Titu Ki Sweety’, ‘Baaghi 2’ and ‘Raid’ In fact, it also marks Alia’s third fi

More often than not Bollywood is accused of copying poster ideas and picking up storylines from movies in the west, especially Hollywood. However, very few know that it is also the other way round. There have been times when Bollywood has come up with really good original content and ideas and has inspired their Hollywood counterparts. Here we give you a rundown of Bollywood films that inspired Hollywood films. 2/6‘A Wednesday’ – ‘A Common Man’ ‘A Wednesday’ is one of the bes

Deepika Padukone’s next is a superhero film inspired by Gal Gadot’s Wonder Woman?

Deepika Padukone poses at the 71st edition of the Cannes Film Festival.(AFP) Those who were wondering what Deepika Padukone would do next, here’s some good news for you. The 32-year-old actor is in talks to play Bollywood’s first female superhero, according to reports. Two instalments of the franchise are already being planned, and it’s going to be one of the most expensive films in the history of Bollywood. A source close to the production told Mumbai Mirror that Deepika wil

How Bollywood Became a Force in China

The Middle Kingdom has embraced Indian cinema, and the blockbuster trend shows no sign of slowing any time soon. When Bollywood superstar Aamir Khan’s family sports drama Dangal pulled in $190 million at the Chinese box office last year — vastly more than any foreign film has ever earned in North America — it came as an absolute surprise to most international industry observers. But the record-breaking result, in fact, was the culmination of many years of careful cultivation

Indian actress and filmmaker Nandita Das’ second feature brings the violent stories of controversial author Saadat Hasan Manto to life. For those unfamiliar with Indian-Pakistani writer Saadat Hasan Manto, Nandita Das’ inspired Manto offers a heady introduction to one of the greatest writers of the 20th century. Pungent, violent, sexual and shocking, his short stories written in the Urdu language of northern India in the 1930s and '40s recall Isaac Babel in their brevity and

Nostalgia and humour dominated the trailer launch of ‘Race 3’

‘Race 3’ boasts of an ensemble cast but is spearheaded by Salman Khan. At the film’s trailer launch this evening at a suburban multiplex, the actors and director Remo D’Souza reminisced how they all have been associated with the franchise in the past. Salman revealed, “Daisy Shah, who is one of the leading ladies of ‘Race 3’ was an assistant choreographer in the first film of the franchise. She has clearly come a long way.” Remo D’Souza piped in, and added, “I was a backgroun

After wrapping up the shoot of Zoya Akhtar's 'Gully Boy', Ranveer Singh is now gearing up for Rohit Shetty's 'Simmba'. He will be starting the shooting in a month's time. Sharing his excitement working for the first time with Rohit Shetty, who is considered king of the masala genre, Ranveer said, "'Simmba' is my first collaboration with Rohit Shetty which I know people are really excited about and me more than anyone to be diving into the masala genre with king of the genre."

Four National Award-winning films to be screened at Cannes

After being honoured at the 65th National Awards last month, four regional films have now been hand-picked for screening by the official Indian delegation heading to Festival de Cannes that starts on May 8. The Assamese film 'Village Rockstars', Malayalam feature 'Bhayanakam', the Jeseri film 'Sinjar' from Lakshwadeep and the Bengali drama 'Nagarkirtan' are the selected films. The India Pavilion, organised by the Union Ministry of Information and Broadcasting in association w

The prestigious National Film Awards ceremony which took place in the capital today was attended by many well-known faces in spite of 65 awardees skipping the ceremony for not being honoured by the President Ram Nath Kovind. Bollywood stalwarts Sridevi, Vinod Khanna, A R Rahmanwere awarded with the prestigious awards by President Ram Nath Kovind. Music maestro A R Rahman bagged two awards - for Best Music Direction for the songs in the Tamil movie 'Kaatru Veliyidai' and the B
1
2